Don't Call It a Comeback

Welcome to my redesigned, rebuilt and reinvigorated blog! Out with the much appreciated BlogCFC and ColdFusion powered site on iknowkungfoo.com. In with a static site hosted on Gitlab Pages, powered by Jekyll and a new domain. It’s been a while, let me explain. No, there is too much. Let me sum up.

I’ve Been Here for Years

It’s been five and a half years since I last posted anything of worth on my old blog. It’s not like I didn’t have anything to post about, I’ve just been busy. Back then, I was working at Equator, a SaaS platform built primarily with ColdFusion and ColdBox. We added a Java SOA layer, built some complex user interfaces and collected an insane volume of data. It was rarely boring, but after 8 years I felt I had reached a plateau and was in need of a change.

I felt I needed a change for three reasons:

They say opportunity knocks, sometimes it emails through LinkedIn.

Last June, I was contacted by Stack Sports (formerly Blue Star Sports). At the time, they had purchased 20 sports technology companies (currently, 27). With a wide variety of tech stacks across the acquisitions, there was plenty to learn (and fix). New development would focus on microservices architecure using NodeJS (yay!) or PHP (ugh!) with front end development using ReactJS and React Native.

It was an opportunity I couldn’t pass up. My initial responsibilities included managing and optimizing a legacy ColdFusion application (part of an acquisition). More recently, I’ve been part of a dev team working on its replacement using Node and React. 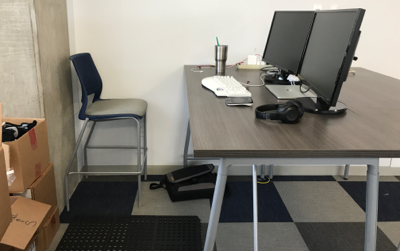 My second biggest fear was moving from a private office with a custom standing desk to an open office floor plan with, well, the closet thing to a standing desk we could find. The change wasn’t so bad. We moved offices earlier this year, gained a considerable space increase and I was able to make a few steps towards a better desk configuration.

My biggest fear was switching from ColdFusion, a Java based application server, to Node and React, which are all modern JavaScript. When I say “modern JavaScript”, I mean ECMAScript6 (ES6). I’ve been working with JavaScript since 1997 and have built some complex applications with it, but all the back-end processing was done in either CF or Java. I had to get used to the ES6 syntax and how these libraries worked. It wasn’t as difficult to make the switch as I’d thought. We’re just building objects and services, passing data back and forth to a UI and running business logic. It’ll just take some time to build the right syntactic muscle memory.

Not long after I started, another fear caught me by complete surprise. I’m handling it pretty well, but I’ll talk about it later.

I’m Gonna Knock You Out

In the meantime, I’m doing everything I can to make a positive impact at this company. I’ve tackled my first two reasons for needing a change fairly well. I had to move the legacy app into AWS at the end of the year. This meant learning all of the 3rd party integration points, creating tests, working with DevOps to make the move and with QA to validate it all still worked. We’re doing AWS for pretty much everything new and that’s another world of tech I’ve started to learn. This isn’t the first time I’ve built a new platform from scratch, but the scale of what we intend to achieve . . . that’s a welcome challenge.

That last one though, that’s interesting. I went from being in an architecture group to being on a development team. The company’s growing and that includes the IT department (psst, we’re hiring). Our managers and directors pitch in and code as much as they can, but that’s not their primary responsibility. I’m not sure that I want to move into a management role if it means not coding for most of my time. I’m having too much fun building the things that run this company.

As long as I keep learning and challenging myself, my career shouldn’t falter. Stick and move, stick and move. Wrecking shop when I write [this code].

Mama said knock you out.