Intro: HTML to Flex in a matter of days

My first project at my new job is to create usage reports for our product. I started building a UI with HTML, Jquery and ColdFusion, but I soon realized that we were going to need a more fluid interface to the data.

The original UI was a basic HTML layout: Enter a date range and choose some options. There are a series of related select menus that have to be populated as you select different options.

For Javascript, I chose JQuery. I’ve heard a lot of great things about it and hadn’t had a chance to use it on a project yet.

For Ajax with ColdFusion, at first I chose AjaxCFC. The installation went fine, but I soon found that the standard version has conflicts with JQuery. There’s an Alpha version that resolves the conflicts, but I feltlike I was spinning my wheels at that point, so I looked for something else.

Lo and behold, I found that you can have JQuery work directly with a CFC to transfer data. Once I figured out a few syntax issues, I was off and running.

Many people know and love CFCHART. Personally, I haven’t used it since somewhere around 1999. I remembered a post by Ray Camden about going directly to the library that powered CFCHART. That post led me to another by one by Christopher Wigginton. Using Christopher’s code, I was able to chart a lot of data comparing District average vs. an Individual School over some time period.

The problem was that I either had to submit the form to an action page that would create the chart, thus losing all the data I’d entered, or I would have to pop-up a window that contained the chart. And pop-ups are just annoying no matter what.

I really needed a way to keep the form and the chart on the same page, change data in the form and reflect those changes in the chart as fast as possible.

That’s when I downloaded Flex Builder.

Now I can collect data and display different charts on the same page. 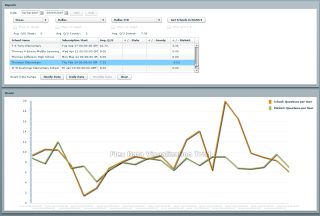 My next few posts will be about how I went from HTML to Flex in a matter a days.